The ambitious goal of the joint project MTCAS (https://www.offis.de/offis/projekt/mtcas.html) is the joint development and implementation of a completely new approach to maritime collision avoidance. One of its role models is the TCAS (Traffic Alert and Collision Avoidance System) successfully used in air traffic, which contributes with very high reliability to avoid collisions in airspace.

A maritime TCAS (MTCAS) supports navigators on board ships and in the Vessel Traffic Service (VTS) in predicting the traffic situation. Based on the prediction, collision detection is improved in order to reduce annoying and often ignored false alarms. If a risk of collision is detected, MTCAS offers the possibility to initiate a safe negotiation of avoidance manoeuvres. The purpose of automated negotiation is to reduce misunderstandings between ships at risk of collision.

In Wilhelmshaven the research vessel Senckenberg (from the Senckenberg Research Institute) and the OFFIS research boat Zuse were involved in the tests. The Senckenberg is equipped with an MTCAS prototype, which realizes the improved collision detection and negotiation functionalities. For testing purposes, the Senckenberg was brought into various allegedly dangerous situations with the OFFIS research boat Zuse. MTCAS reliably detected the dangerous situations and suppressed superfluous collision alarms that were off the ship’s own route or in areas that could not be reached by the ships, such as land masses. Parallel to the tests, a video shoot was realized, the result of which will be presented at the MTCAS demonstration the beginning of September. We thank our partners from the Institute for Chemistry and Biology of the Marine Environment (ICBM) at the University of Oldenburg for their support. After that we will make the video available to the public – we will keep you informed!

Zuse and Senckenberg on collision courses 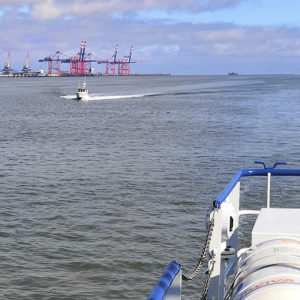 The ships got close, but a collision was avoided 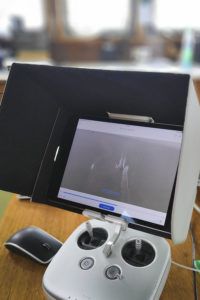 The cameraman is getting the drone ready for recording. 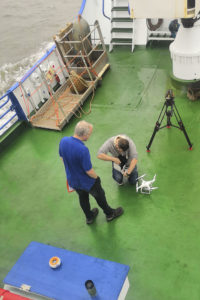